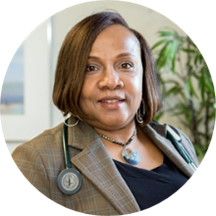 Dr. Whitton is the owner of Adonai Optimal Health and Wellness, a Naturopathic practice with office locations in Milford and New town, CT. Dr. Whitton received her undergraduate degree from the College of New Rochelle (CNR), in Westchester County, New York, where her major course of study was Biology Pre-medicine. She was a recipient of a Bachelor of Science degree in Biology from CNR, and would later go on to become a Science teacher in New York City and Westchester County public schools.
Dr. Whitton received an informal education in natural medicine from her mother, whose knowledge of herbal medicine was acquired by means of her West Indian and Cuban ancestry. She recalls watching in awe as her mother would prepare a myriad of herbal preparations which she would use successfully to treat her family.
As a result of her childhood experience, Dr. Whitton established a business in New York City which she called Eve's Botanicals, but later she realized the necessity for formal training in order to satisfy the deep-seated desire to heal chronic, debilitating diseases, including cancer, by natural means. Ultimately, after many years of service teaching earth science and biology, Dr. Whitton would depart from the New York State Board of Education, in order to pursue an education in Naturopathic Medicine and would shortly thereafter, enroll in the University of Bridgeport's College of Naturopathic Medicine (UBCNM), in August 2004.